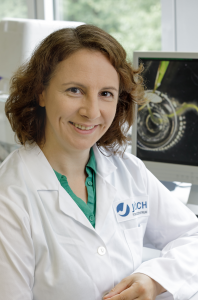 Use of non-invasive phenotyping, molecular approaches and beneficial microbes in the understanding and improvement of Brachypodium nutrient uptake with focus on Nitrogen, Phosphorus and Zinc

In times of increasing global population and decreasing arable land per capita, the understanding of plant nutrient uptake and possible nutrient uptake improvement strategies are of utmost importance. Our work focuses on Nitrogen (N) – the second most abundant nutrient in plants, Phosphate (P) – whose resources are limited on global level, and the micronutrient Zinc whose deficiency affects the health of over 20% or the world population. We present studies where the use of plant growth promoting rhizobacteria (PGPR) has resulted in improved plant performance under limited N or P. Here, plant growth has been analyzed by non-invasive root phenotyping techniques GrowScreen Page and/or via EcoFab. The latter has been used in combination with Plant Screen Mobile, for non-invasive shoot leaf area estimation. Increase of plant biomass has been seen in P deficient plants inoculated with a PGPR. A time series analysis of root phenotype, allowed not only visualization of increased root length and changes in root architecture, but also to pin-point the time when growth promotion takes effect after inoculation. A sand experiment confirmed these results and found biomass increase in the inoculated plants. Study of the molecular mechanisms behind this phenotype is ongoing. In the case of limiting N where plants were inoculated with N-fixing PGPR, an end-point harvest showed a change in the ratio of primary to lateral roots, but here the most important finding was an increase of N concentration in root and shoot, increase of shoot biomass and leaf area. We complemented this destructive harvest with proteomics to investigate the systemic response of Brachypodium constitutively grown under limiting N, to the interaction with the respective PGPR. Data analysis revealed that these N-fixing bacteria impact central Nitrogen metabolism in Brachypodium, and indicate a mode of action that upregulates specific N transporters on the root plasmamembrane. In a transfer of knowledge approach, we are non-invasively determining the base-line plant phenotype of Zinc deficient Brachypodium and carrying-over novel candidates originating from an Arabidopsis proteomics study, through transcript profiling experiments. In this manner we hope to pre-select candidates that could be used as breeding targets in crop plants.